The Ring-Sheared Drop Experiment plans on using a Navitar microscope, lighting modules and Pixelink cameras for microfluidic measurements in space.

In microgravity, uncontained liquids form a sphere because of surface tension allowing scientist to study liquids without container walls. For this program, two systems are planned. The initial unit will be deployed on its’ first sub-orbital flight in the spring of 2018 (Blue Origin). The second unit will launch sometime in 2018 and will operate on the International Space Station. This is a biophysics application that will observe and capture certain characteristics of amyloids fibrils in a protein solution. Amyloid fibrils are widely studied due to their importance in a number of neuro-degenerative diseases including Alzheimer’s and Parkinson’s disease. 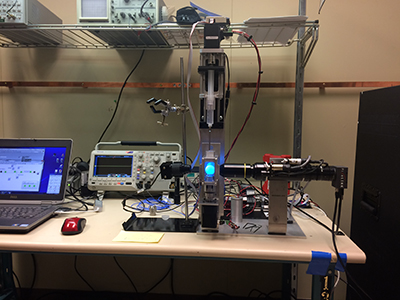 There are a bevy of Navitar components in the system including a lighting module, objective, 12X motorized zoom lens and required adapters.

Jim McClellan Teledyne Brown Engineering’s Project Manager, says the plan is to deploy two Pixelink cameras per system. "One camera will be capturing images from the microscopy project and the 2nd will serve as both a backup and surveillance unit for keeping watch on the entire system while the experiments are performed. We are pleased with the 9MP resolution. The zoomed images looked great! I was able to capture the two consecutive images of the sphere rotating at 30rpms, a critical requirement for the science.”